We are continually monitoring the Covid-19 situation. Click here for more information.
Experienced and Aggressive Legal Representation Resulting in Over 50 Million Dollars in Settlements and Verdicts for Injured Accident Victims Contact Us Now For a Free Initial Consultation

We help seriously injured victims of rear end car accidents across Florida, including, those in Miami, Fort Lauderdale, the Palm Beaches, the Florida Keys, Naples and Tampa. 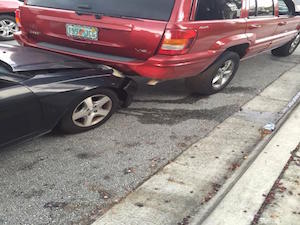 The most frequently occurring car accidents in Florida, the ones that Fort Lauderdale car accident lawyer Joseph Lipsky helps injured clients with the most often, particularly happening upon the roadways in Miami, Fort Lauderdale and the Palm Beaches are so-called rear end crashes. Rear end type accidents happen over a million times annually across the United States. These accidents happen when a car traveling behind another runs into it. Typically these types of crashes happen because the driver of the second, or following, vehicle is doing something other than watching the traffic and road in front of them.

Florida law has a rebuttable presumption which states that the second/following vehicle is the cause of rear end car accidents. This presumption may be overcome if there is proof that the first vehicle was negligent, for example, by stopping their car unexpectedly. Miami car accident lawyer Joseph Lipsky understands the importance of preserving the evidence from the scene of a rear end car accident and from the vehicles involved in the crash to insure that his clients prevail in recovering their maximum financial compensation for their injuries. Over the past 25 years, Miami car accident lawyer Joseph Lipsky has helped his injured clients recover tens of millions of dollars as compensation for their injuries, lost wages, medical bills and mental anguish.

Some of the most frequent causes of rear-end car accidents include, the following driver:

Remember, all initial consultations and second opinions are free. The call and personal injury consultation are FREE, so do not delay in calling to find out about your legal rights.

Contact Us
Practice Areas
Client Reviews
★★★★★
Mr. Lipsky helped my parents get more money for the injuries they suffered in a car accident case then we ever could have imagined. His office, especially Sandy, are caring, responsive and highly professional. We highly recommend Mr. Lipsky. Sandra F.
★★★★★
Joe Lipsky really help my family recover what was owed to us. He answered all of our questions and in the end we ended up with what we deserved. He didn't stop fighting for us. Alisha W.
★★★★★
The whole team at this office is incredible. They are very professional, and they truly care about their clients. Whenever I needed assistance with anything I knew that they would be there with an answer to any question that I had. I want to also personally extend a thanks to Jesse for her tremendous work, and of course for Mr. Lipsky for everything they did for me. I would recommend this law office to anyone, you will not regret your decision! Chelsea Left
★★★★★
Very professional and knowledgeable. He helped us recover all of our losses in this accident without hesitation. I would recommend him to anyone and will use him again if I find myself in this unfortunate situation again. Thank you! Liz Fitz
★★★★★
If you want the Job done then you want Attorney Lipsky office to do it for you. I have trusted this office with all my personal injury needs since the early 2000. Not only is the attorney awesome, the staff Sandy and Jessie are awesome as well. They answered all my questions and concerns in a timely matter. #TeamLipsky QueenAmong Queens
View More
Submit a Law Firm Client Review